Nutrisi merupakan bagian dari fisiologi mikroorganisme yang berkaitan dengan kebutuhan nutrien untuk pertumbuhan.
Nutrien terbagi menjadi:
Carbon
Carbon incorporated into biosynthetic pathways may be derived from organic or inorganic sources some organisms can derive it from CO2, while others require their carbon in ‘ready-made’, organic form.
Hydrogen
Hydrogen is also a key component of macromolecules, and participates in energy generation processes in most microorganisms.
In autotrophs, hydrogen is required to reduce carbon dioxide in the synthesis of macromolecules.
Oxygen
Oxygen is of central importance to the respiration of many microorganisms, but in its molecular form (O2), it can be toxic to some forms.
These obtain the oxygen they need for the synthesis of macro molecules from water.
Nitrogen
Nitrogen is needed for the synthesis of proteins and nucleic acids, as well as for important molecules such as ATP.
Microorganisms range in their demands for nitrogen from those that are able to assimilate (‘fix’) gaseous nitrogen (N2) to those that require all 20 amino acids to be provided preformed.
Between these two extremes come species that are able to assimilate nitrogen from an inorganic source such as nitrate, and those that utilise ammonium salts or urea as a nitrogen source. 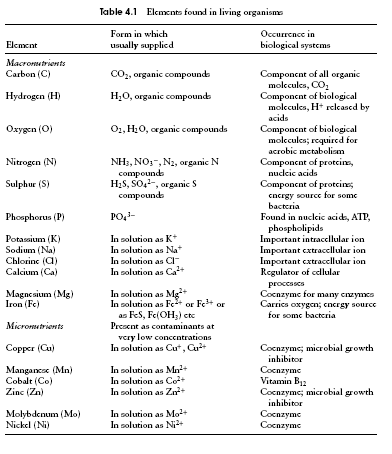 Nutritional categories
Microorganisms can be categorized according to how they obtain their carbon and energy.
Carbon is the most abundant component of the microbial cell, and most microorganisms obtain their carbon in the form of organic molecules, derived directly or indirectly from other organisms.
A heterotroph must use one or more organic compounds as its source of carbon. An autotroph can derive its carbon from carbon dioxide.
A chemotroph obtains its energy from chemical compounds. A phototroph uses light as its source of energy.
We can also categorize microorganisms nutritionally by the way they derive the energy they require to carry out essential cellular reactions.
Autotrophs thus fall into two categories:
The great majority of heterotrophs obtain energy as well as carbon from the same organic source.
Such organisms release energy by the chemical oxidation of organic nutrient molecules, and are therefore termed chemoheterotrophs.
Those few heterotrophs which do not follow this mode of nutrition include the green and purple non- sulphur bacteria. These are able to carry out photosynthesis and are known as photoheterotrophs.
Microorganisms based on substances they use 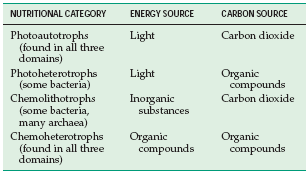 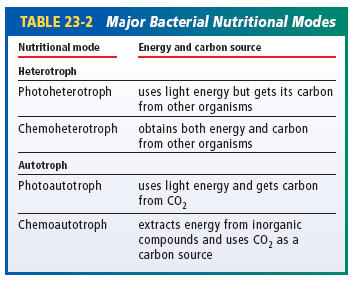 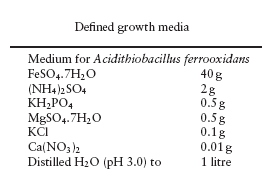 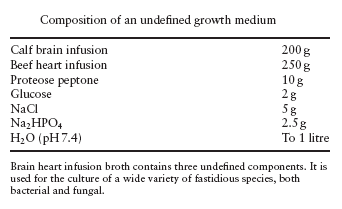 A selective medium is one that favours the growth of a particular organism or group of organisms, often by suppressing the growth of others.
Selective media such as bismuth sulphite medium preferentially support the growth of particular bacteria.
The bismuth ion inhibits the growth of Gram-positive organisms as well as many Gram negative types, this medium is used for the isolation of the pathogenic bacterium Salmonella typhi, one of the few organisms that can tolerate the bismuth.
A differential medium allows colonies of a particular organism to be differentiated from others growing in the same culture.
Differential media can be used to distinguish between organisms whose growth they support, usually by means of a coloured indicator.
MacConkey agar contains lactose and a pH indicator, allowing the differentiation between lactose fermenters (red colonies) and nonlactose fermenters (white/pale pink colonies).
Many media act both selectively and differentially.
MacConkey agar, for example, also contains bile salts and the dye crystal violet, both of which serve to inhibit the growth of unwanted Gram-positive bacteria.
Mannitol salt agar is also both selective and differential. The high (7.5 per cent) salt content suppresses growth of most bacteria, whilst a combination of mannitol and an indicator permits the detection of mannitol fermenters in a similar fashion to that just described.
An enrichment culture uses a selective medium to encourage the growth of an organism present in low numbers.
Enrichment media provide conditions that selectively encourage the growth of these organisms, the use of blood agar in the isolation of streptococci provides an example of such a medium.
Blood agar can act as a differential medium, in allowing the user to distinguish between haemolytic and nonhaemolytic bacteria.
Factors Affecting Microbial Growth
Oxygen
Some prokaryotes can live only by anaerobic metabolism because molecular oxygen is poisonous to them. These oxygen-sensitive organisms are called obligate anaerobes. Ex: Clostridium tetani
Other prokaryotes can shift their metabolism between anaerobic and aerobic modes and thus are called facultative anaerobes.
Many facultative anaerobes alternate between anaerobic metabolism (such as fermentation) and cellular respiration as conditions dictate. Ex: Escherichia coli
At the other extreme from the obligate anaerobes, some prokaryotes are obligate aerobes, unable to
survive for extended periods in the absence of oxygen.
They require oxygen for cellular respiration. Ex: Mycobacterium tuberculosis
Aerotolerant anaerobes are organisms that are basically anaerobic, although they are not inhibited by atmospheric oxygen, they do not utilise it.
Microaerophiles require oxygen, but are only able to tolerate low concentrations of it (2–10 per cent), finding higher concentrations harmful.
Organisms inoculated into a static culture medium will grow at positions that reflect their oxygen preferences. 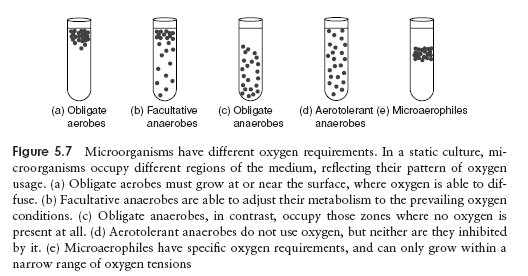 Temperature
Microorganisms as a group are able to grow over a wide range of temperatures, from around freezing to above boiling point.
There are three temperatures which are called the cardinal temperatures: Maximum, optimum and minimum temperatures. 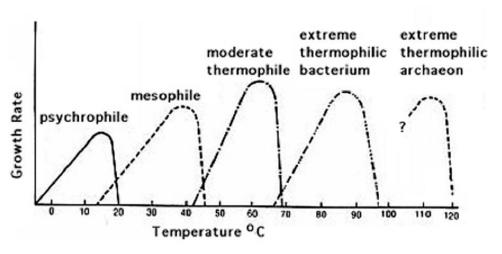 Every organism has a maximum temperature above which growth is not possible (there is a limit beyond which some temperature-sensitive macro-molecules such as a protein, nucleic acid, or lipid will become denatured, and therefore nonfunctional).
Optimum temperature at which growth is most rapid.
Minimum temperature below which the lipid membrane is not fluid enough to function properly (“freezing” of the cytoplasmic membrane so it no longer functions properly in nutrient transport or proton gradient formation).
The optimum and limiting temperatures for an organism are a reflection of the temperature range of its enzyme systems, which in turn are determined by their three-dimensional protein structures
Once the optimum value is passed, the loss of activity caused by denaturation of enzymes causes the rate of growth to fall away sharply
In the laboratory, appropriate temperaturesfor growth are provided by culturing in an appropriate incubator.
These come in a variety of shapes and sizes, but all are thermostatically controlled and generally hold the temperature within a degree or two of the desired value.
Psychrophilic: Prokaryotes gro well at 0 C to 20 C.
Mesophiles: Grow best at 20-40 C
Thermophiles: Grow at 45-110 C. thermophilic species have evolved proteins that resist being destroyed by heat.
pH
The pH range (between minimum and maximum values) is greater in fungi than it is in bacteria. Most microorganisms grow best around neutrality (pH 7).
Many bacteria prefer slightly alkaline conditions but relatively few are tolerant of acid conditions, and fewer still are acidophilic. Most bacterial species grow best at pH 6.5 to7.5.
However, certain species, such as those that make yoghurt and sour cream from milk, favor acidic environment that have a pH of 6.0 or lower.
Acid-loving prokaryotes are called acidophiles. The pH value of growth media is adjusted to the desired value by the addition of acid or alkali during its preparation.
The metabolic activities of microorganisms often means that they change the pH of their environment as growth proceeds, so it is important in a laboratory growth medium that a desirable alkali is produced pH is not only set but maintained. This is achieved by the use of an appropriate buffer system.
Phosphate buffers are widely used in the microbiology laboratory; they enable media to minimize changes in their pH when acid or alkali is produced. 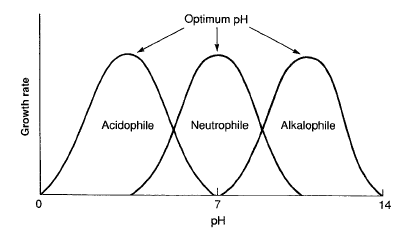 Osmotic pressure
Osmosis is the diffusion of water across a semipermeable membrane from a less concentrated solution to a more concentrated one, equalising concentrations.
The pressure required to make this happen iscalled the osmotic pressure.
If a cell were placed in a hypertonic solution (one whose solute concentration is higher), osmosis would lead to a loss of water from the cell (plasmolysis).
This is the basis of using high concentrations of salt or other solutes in preserving foods against microbial attack.
In the opposite situation, water would pass from a dilute (hypotonic) solution into the cell, causing it to swell and burst.
The rigid cell walls of bacteria prevent them from bursting; this, together with their minute size, makes them less sensitive to variations in osmotic pressure than other types of cell.
They are generally able to tolerate NaCl concentrations of between 0.5 and 3.0 per cent.
Haloduric (‘salt-tolerant’) bacteria are able to tolerate concentrations ten times as high, but prefer lower concentrations, whereas halophilic (‘salt-loving’) forms are adapted to grow best in conditions of high salinity such as those that prevail in the Dead Sea in the Middle East.
In order to do this without plasmolysis occurring, they must build up a higher internal solute concentration, which they do by actively concentrating potassium ions inside the cell.
Preservation of microbial cultures
Microbial cultures are preserved by storage at low temperatures, in order to suspend growth processes.
For short periods, most organisms can be kept at refrigerator temperature (around 4 ◦C), but for longer-term storage, more specialised treatment is necessary.
Using deep freezing or freeze-drying, cultures can be kept for many years, and then resurrected and re- cultured.
Deep freezing requires rapid freezing to −70 ◦C to −95 ◦C, while freeze-drying (lyophilisation) involves freezing at slightly less extreme temperatures and removing the water content under vacuum.
Long-term storage may be desirable to avoid the development of mutations or loss of cell viability.
*Sumber: Nitya Wita Utama
Baca Juga :