Read the following text to answer questions number 1 and 2! 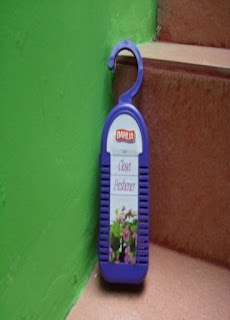 35. What is the text about?
A. Really New For You
B. Fresh Wardrobes
C. Dahlia Closet Freshener
D. Cellophane Wrapper
36. The second part of the text tells you about the way...the product.
A. To make
B. To use
C. To sell
D. To get
Read the letter and answer questions 37 and 38.
Bees are flying insects closely related to wasps and ants, and are known for their role in pollination and for producing honey and beeswax. There are nearly 20,000 known species of bees in nine recognized families though many are undescribed and the actual number is probably higher. They are found on every continent except Antarctica, in every habitat on the planet that contains insect-pollinated flowering plants.
Bees have a long proboscis (a complex "tongue") that enables them to obtain the nectar from flowers. They have antennae almost universally made up of 13 segments in males and 12 in females, as is typical for the super family. Bees all have two pairs of wings, the hind pair being the smaller of the two; in a very few species, one sex or caste has relatively short wings that make flight difficult or impossible, but none are wingless.
The smallest bee is Trigona minima, a stingless bee whose workers are about 2.1 mm (5/64") long. The largest bee in the world is Megachile pluto, a leaf cutter bee whose females can attain a length of 39 mm (1.5"). Members of the family Halictidae, or sweat bees, are the most common type of bee in the Northern Hemisphere, though they are small and often mistaken for wasps or flies.
What is the text about?
A. Describing bees in general
B. Explaining bees in Antarctica
C. Telling the habitat of the bees
D. Giving information about bees in the Northern Hemisphere
38. What is the main idea of paragraph one?
A. Bees live on every continent
B. Bees belong to flying insects
C. Bees produce honey and beeswax
D. Bees only live with insect-flowering plants
Read the text and answer questions 39 and 40.
Maura, who liked to be thought of as the most beautiful and powerful queen of Arabia, had many suitors. One by one she had discarded them, until her list was reduced to just three sheiks, all equally young and handsome, rich and strong. It was very hard to decide who would be the best of them.
One evening, Maura disguised herself and went to the camp of three sheiks, as they were about to have dinner, and asked them for something to eat.
The first gave her some leftover food; the second gave her some unappetizing camel’s tails, the third sheik, who was called Hakim, offered her some of the most tender and tasty meat. After dinner, the disguised queen left the sheik's camp.
The following day the queen invited the three sheiks to dinner at her palace. She ordered her servants to give each one exactly what they had given her the evening before.
Hakim, who received a plate of delicious meat, refused to eat it if the other two could not share it with him, and this act finally convinced Queen Maura that he was the man for her.
"Without question, Hakim is the most generous of you," she announced her choice to the sheiks. "So it is Hakim I will marry."
The queen ordered her servants to give the sheiks the same kind of food as that she got from them because she wanted...
A. To entertain her guest
B. To test the sheik's food
C. To see the sheik's reactions
D. To repay the sheik's kindness
40. What’s the moral value that you can learn from the story?
A. Don’t look at someone from the appearance
B. We should make a party to decide something
C. Don’t trust easily to someone who has given a valuable thing
D. We have to be careful in choosing the person to chase our life with
For questions number 41 and 42!
Choose the best words to complete the letter!
Dear Aunty,
I have a two-year-old male cat. He is a stray we allow into the house but he loves the outdoors. There is this other big cat in the neighborhood who is rather (41)......... My problem is after fight with the big cat, my cat returns home with bleeding scars. Sometimes I‘d wake up in the middle of the night to rescue him from a fight. Please tell me how to end this problem. I (42)......... want to give him away.
Julia
41. Fierce
42. don’t
43. Choose the best arrangement of the words to make a good sentence!
Is – but – beautiful – the girl – attitude – bad – has – she - a
1 - 2 - 3 - 4 - 5 - 6 - 7 - 8 - 9
= 4 – 1 – 3 – 2 – 8 – 7 – 6 – 5 - 9
44. Choose the best arrangement of the words to make a good sentence!
your – just – laptop – put – this case – inside – slide – and – your bag – it – into
1 - 2 - 3 - 4 - 5 - 6 - 7 - 8 - 9 - 10 - 11
= 2- 4- 1- 3- 6- 5- 8- 7- 10- 11- 9
Read the text and answer the question!
Please join us
To celebrate
The graduation of our son
Jacob Lewis
From
Roland Middle School
Saturday, June 2, 2017
At 6:30 p.m.
Tundra Black’s Restaurant (Black Room)
785 Card Avenue Arlington, TX
Dinner will be provided
Paul and Diane Lewis
RSVP by May 25th
Diane Lewis 789-542-7891
45. Who has graduate from the middle school? Jacob Lewis
Baca Juga :